Pap test and its findings

The Pap smear is part of the of cervical cancer screening programme in most countries, so the cost of a Pap test is covered by health insurance companies. In Germany, women between the ages of 20 and 34 are entitled to a free Pap test every year, while women over 35 are entitled to one free Pap test along with an HPV test every three years. Other countries are also about to change or have already changed cervical cancer screening to primary HPV screening for older women and using the Pap smear as a primary screening test alone only in the younger patient group.

The cell samples for a Pap test are obtained by a gynaecological smear. The gynaecologist carries this out with a special brush. The procedure is painless and risk-free. The gynaecologist then sends the Pap smear to a laboratory, which is why it takes about a week to get the results of a Pap test. The doctor and patient discuss what to do after an abnormal Pap smear result.

What is a Pap smear?

For the Pap test, a smear sample is taken from the cervix and examined under the microscope for cellular changes. Five groups (according to the  “Nomenclature of Munich”) provide information about the degree of change. Pap I and II are harmless. From a Pap III onwards, a result is considered abnormal. However, Pap tests are error-prone and can yield false positives. This means that even sometimes healthy women receive abnormal Pap smear results. They then needlessly have to undergo further examinations. A Pap test can also produce a false-negative result. In this case, the test fails to detect an existing cell change.

A Pap I result means that the examined cells appear healthy. No further examination is required. The next Pap smear is not performed until the next screening interval. 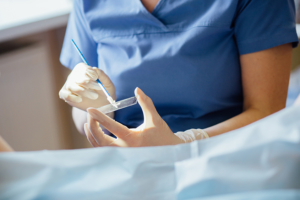 At Pap II, slightly inflamed but not alarmingly altered cells are found. Pap II is considered a normal finding and there is no suspicion of cancer. Usually, no further treatment is necessary.

Pap II a is also a normal finding, but here the gynaecologist decides whether and when the test should be repeated on the basis of the patient’s medical history.

In other countries, this finding is also called ASC-US.

Pap III means that the test findings are unclear or inconclusive. Although the cells are clearly abnormal and altered, the cause of this can only be determined through further examination. In this case, the Pap smear is usually repeated after a certain period of time. At this stage, the affected cells have not yet developed into cancer cells.

With Pap IIID 1 (also called LSIL (low grade squamous intraepithelial lesion) in some countries), there are abnormal cells that indicate changes in the tissue: so-called dysplasia. However, these very often tend to regress. This finding is also called mild to moderate dysplasia and occurs relatively frequently in young women. The affected women are monitored using watchful waiting. If the findings have not changed after one year, further examinations such as a vaginal endoscopy (colposcopy) are necessary.

At Pap IV, there is a high probability of severe tissue changes (dysplasia), also called HSIL or high grade squamous intraepithelial lesion. The affected woman may have a precancerous stage or already have cervical cancer, and such mutations rarely disappear on their own. Regardless of the result of HPV tests, a biopsy provides clarity: in a vaginal endoscopy (colposcopy), a tissue sample is taken from the cervix. Since not every gynaecologist can perform a colposcopy, affected women may have to make an appointment at a so-called dysplasia consultation or a specialised gynaecological clinic.

In the case of a Pap V finding, malignant altered cells are detectable in the Pap smear. The probability of cervical cancer is very high. Nevertheless, Pap V is still not a cancer diagnosis. For a reliable result, a tissue sample via vaginal endoscopy (colposcopy) is necessary.

This page is intended to give patients a summary overview of the topic. Reading this page does not replace a medical consultation or a discussion with your doctor.

This page is intended to give patients a summary overview of the topic. Reading this page does not replace a medical consultation or a discussion with your doctor.